Summer is coming… And with him, our saga! This year, we offer you a saga of the summer on a tour of France of the wine regions ! 🙂 Each month, we will present you 3 French wine regions with a map of the regions to better locate them 😉
We will start this month with vineyards in the West of the France: The South-West, Bordeaux (of course!) and the Loire ! 🙂

It's up to you to discover them! Happy reading and see you soon for the rest:)

The tour of France of the wine regions, episode 1: the West

There are 29 appellations of controlled origin distributed in the following sub-regions:
The Bergeraçois, the Agenais – Lot & Garonne, the Quercy/ Albigeois/ Rouergue – Tarn & Garonne, the Basque Country/ Béarn and Gascony.

The production is well distributed between reds (about 40%) and whites (about 35%), not to mention the 13% rosés and 8% soft whites.

The majority grape varieties of this region:
For the reds: malbec, cabernet franc, fer servadou, tannat, négrette, duras…
For the whites: Sauvignon, Semillon, Mauzac, small and large mansengs, out of sight…

A little anecdote?
In the South West region there are many little-known native grape varieties… This is what makes it rich!

Journey to the past…

It was in 1553 that King Henry IV was born in Pau. Following the common practice of "baptism béarnais", which is recommended in order to prevent diseases, he was rubbed lips with a clove of garlic and made to breathe (and soak the lips) a cup of Jurançon to soften the garlic. (This wine was already famous at the time!) 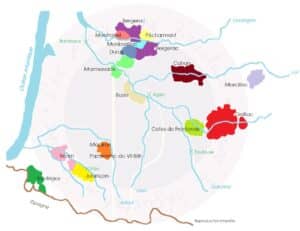 There are 63 appellations of controlled origin (all that?!) :
Among these appellations, there are some regional ones: Bordeaux, Bordeaux Supérieur and Crémant de Bordeaux. Then the other appellations are divided into a few sub-regions: Médoc, Blayais, Bourgeais, Graves, Sauternes, Barsac and Cérons, Libournais, Entre-deux-mers.

The production is mostly red (more than 80%), these tannic reds as we like them! The production of white, on the other hand, amounts to about 10-20%.

A little anecdote?
In Bordeaux, there is no question of using the word "domain"! No, here the winegrowers own castles. There are more than 3000 in the region, dating from different eras. They represent the prosperity of the Bordeaux vineyards. 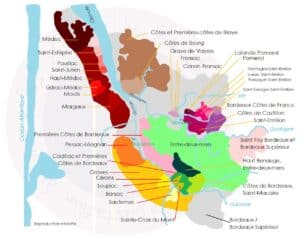 There are 31 appellations distributed in the following sub-regions:

The production is mainly white (about 40%), the production of rosés and reds each amounts to about 20%, finally the bubbles are well present with 15%.

A little anecdote?
Very influential in Bordeaux, it is not far from Saumur, at the Abbey of Fontevraud that we find the burial of Eleanor of Aquitaine. 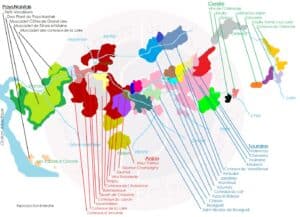