… and we continue the saga of the summer on the tour of France of the wine regions ! Do you like it? We like it :-)!

In June, we talked about the South West, Bordeaux and Loire regions.

This time, it will be: Languedoc Roussillon, Provence and the Rhône.

It's up to you to discover them! Happy reading and see you soon for the rest:)

Summer 2021 Saga: the tour of France of wine regions, episode 2: The South East

This vineyard is often divided into two: Languedoc and Roussillon. Between them, they have nearly 220,000 ha. (most of which is in the Languedoc) It is one of the largest in the world!
There are about 4000 winegrowers.

In the Languedoc, there are about thirty appellations of controlled origin, against a dozen for Roussillon.

Production in these two regions is mainly linked to red wines. In Roussillon, there are also many natural sweet wines, some rosés and some whites.

A little anecdote?
The Languedoc Roussillon is the region of… Cassoulet! We hear about it from all sides, and for gourmets, it is a dish not to be done without!
If you take a tour of the region, know that cassoulet goes perfectly with a red wine with a dominant carignan (Minervois appellation, Corbières…)

Did you know that? 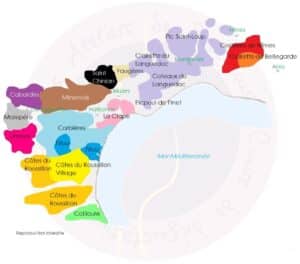 Here, there are 9 appellations of controlled origin : 4 of them are sub-regional and 5 communal.

The production is mainly rosé (more than 70% of the production) with some soft reds and rare whites. We get very different and interesting wines because they are all blended and from different soils.

The grape varieties : they are very numerous (45), the main ones being:
For the reds: Grenache, Cinsault, Syrah, Carignan, Mourvèdre
For whites: vermentino, ugni blanc, bourboulenc, clairette, sauvignon, marsanne

A little anecdotes?
It was in Provence that the first vines of France were born in 600 BC!

Do you know Ridley Scott's adaptation of Peter Mayle's novel Un Bon Cru ? (Film A Great Year). This film tells us the story of Max who inherits a wine estate in Provence, in the Luberon more precisely, because it is there that Ridley Scott decided to shoot his film! It is a beautiful comedy full of clichés that highlights the beautiful wine landscapes of Provence. 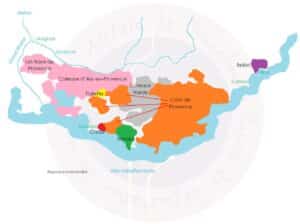 The Vineyards of the Rhone Valley have 31 appellations of controlled origin.

Production is mostly red (80%). They are also often blended wines.

A little anecdotes?
It is in Avignon that we find the Palais des Papes, which is why we find in this region a quality viticulture to serve excellent wines to the latter. The wines have an international reputation!

President of the Châteauneuf-du-Pape wine union, he is known to be the precursor of appellations d'Origine Contrôlée. It is he who will establish rules and delimit the vineyard of Châteauneuf-du-Pape. He is also part of the group of union presidents at the origin of the creation of the INAO (National Institute of Appellations of Origin) and the first French AOCs in 1936…. Just that! 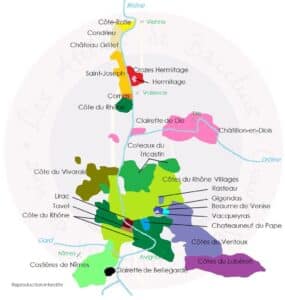 The rest of the regions in the next Saga in August…