This month we take you to discover the eaux-de-vie … And not just any of them!
We offer you a zoom on Armagnac and Cognac!
Do you know them? Do you like them? Come on, let's stop dreaming… Let's get down to business!
Happy reading:)

Let's start with the Armagnac:

It is a wine brandy produced in the south-west of the France, in the Gers for the most part, as well as in the Lot-et-Garonne and the Landes. The production area covers only 12,000 hectares (compared to about 100,000 ha at one time).

Its history remains unclear, but Armagnac would be the first brandy of France. Its first use dates back to the 14th century and it would have therapeutic virtues.
It was in 1936 that Armagnac obtained its AOC which precisely defined its rules in terms of terroir and method of elaboration.
Armagnac is known under 3 geographical names : Bas-Armagnac, Armagnac-Ténarèze and Haut-Armagnac. There is also the Blanche-Armagnac, whose specifications are a little particular (it does not pass in oak barrels).

This brandy is obtained by the distillation of white wine in an Armagnac still and aged for years in oak barrels.
Distillation is the principle of heating wine to recover its alcohol. It must take place before March 31 of the year following the harvest, but this date may vary depending on the year.
The still most frequently used for Armagnac is continuous distillation with trays. It is called the Armagnacais still (continuous column still). Here, a single passage is made in distillation, and we obtain eaux-de-vie between 50 and 65% alcohol.

After obtaining this brandy, we move on to the stage of aging (minimum 2 years). In oak barrels, it is an essential step that transforms the colorless brandy into red gold (following the dissolution of oak components) and brings new aromatic factors.
When it reaches between 40 and 48% flight. of alcohol, armagnac is placed in stainless steel tanks to ensure good preservation. From there, it will no longer age.

When bottling, unlike wine, you have to be careful to leave them vertically… Alcohol can alter the cork!

The terroir and the grape varieties:

In this vast region, there are different types of soils, which will bring different aspects to Armagnac. There are fine quartz sands, continental and fluvial sediments and siliceous clay.
As for grape varieties, we are on 55% Ugni-Blanc (brings finesse and quality to the eau-de-vie), 35% Baco (hybrid of the crazy white and the American Noah, brings roundness and aromas of ripe fruit), Colombard (appreciated in the blends, it brings a fruity and spicy aspect), and very little Folle Blanche (gives finesse and a floral aspect).

Armagnac is usually drunk as a digestive, pure.
It is also used to "flame" dishes, raise a sauce, make a marinade or flavor desserts (including Pastis Gascon).
It can also be enjoyed with dark chocolate, a cigar or in the form of a "duck", which is also called the "Gascon hole": in a spoon with a piece of sugar and a little white armagnac that is flamed. 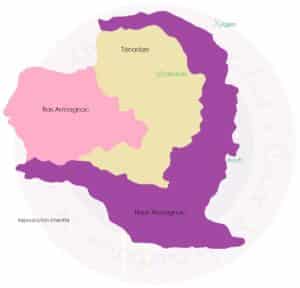 Cognac is a wine brandy produced in the west of the France, around the city of Cognac, and globally in the departments of Charente, Charente-Maritime, Dordogne and Deux-Sèvres. Its area covers 80,000 hectares.

Cognac developed a little "at random". Wishing to export their wine to the Netherlands and England, the winemakers of the region decided to distill it so that it could better withstand the journey. The brandy obtained, especially thanks to the aging in oak barrels, is a success in the Netherlands, which renames this wine "burnt wine", which then gave its name to the "Brandy".
The AOC Cognac recognized in 1919 is since 1938 divided into 6 crus: the Grande Champagne, around the city of Segonzac, the Petite Champagne, which is located around Barbezieux (in Charente), Archiac and Jonzac (in Charente-Maritime), the Borderies, around the village of Burie, the Fins Bois, which are located on the outskirts of the three previous areas. There are also the Bons Bois, further away from Cognac, as well as the Bois Ordinaires (low cognac production in this area which is towards the Deux-Sèvres and the Dordogne).
In addition, since 2020, the know-how of cognac production has been inscribed in the Inventory of French Intangible Cultural Heritage.

This brandy is obtained by double distillation, called distillation on Charentais still (or Cognacais, it is a still to iron). Its particularity is that it includes a first heating to obtain an alcohol at 20-30 degrees (the scramble), then it is redistilled in "good heat" at about 70 degrees. It is thanks to this second distillation that the cognac is obtained.

The terroir and the grape varieties:

The soils are mostly calcareous.
It is an overwhelming majority of Ugni-Blanc that is found in Cognac (97%). This grape variety brings finesse and quality to the eau-de-vie. 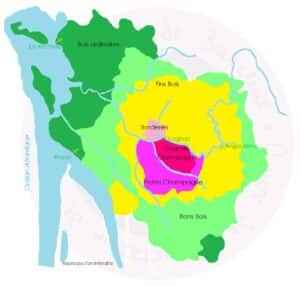 We can find different types of armagnacs and cognacs. We then find on the label an inscribed age (it varies according to the time spent in oak barrels). This can be a brandy from blending (i.e. from several harvests) or in vintage (from the same harvest year).
These different mentions are found as below:
– the " *** " ("three stars") or " VS " (very special) brings together different armagnacs of which the youngest has at least one year of aging under wood, for the youngest cognac is at least 2 years old.
– the " VSOP " (very superior old pale) the aging is at least four years (for cognac as for armagnac).
– the " Napoleon ", the aging is at least six years.
– the " out of age " or " XO " (extra old), the aging is at least ten years.
– the " Millésime " from a single harvest (same year).

The big difference between Cognac and Armagnac is related to their image.
Cognac is seen as an " industrial product ", which produces in large quantities (volume equivalent to 35 bottles of cognac for 1 of armagnac). It is renowned for its initial export (thanks to the port of La Rochelle in particular), and because it has become widely known in the United States (and little by little in China). Very present internationally, 98% of the production is exported. There are mainly 4 large houses: Hennessy, Courvoisier, Remy-Martin and Martell.
Armagnac is seen as an " artisanal product ", it is made in small quantities, by producers or family houses that perpetuate traditions and know-how. Its history is part of the cultural heritage of the region and French gastronomy. However, its notoriety does not go beyond the French borders. It remains mainly consumed in France.

A little anecdote to finish:

Cognac has become very trendy in the United States. This is thanks in particular to the artist Jay-Z! He partnered with Bacardi to create his cognac brand: D'Ussé.

The origin of the cannelé

The manufacture of cork stoppers

The different colors of marianne capsules