… and we continue the saga of the summer on the tour of France of the wine regions ! Let's go for a last round!

In June, we talked about the South West, Bordeaux and Loire regions.
In July it was Languedoc Roussillon, Provence and the Rhône.

This time, it will be: Burgundy, Alsace and Champagne !

We hope you enjoyed this saga:)

Saga: the tour of France of the wine regions, episode 3: the Grand Est

There are 84 appellations of controlled origin (7 regional AOCs, 44 Villages and 33 Grand Crus).

The production is mainly white: 60%, against a little less than 30% for the reds and about 10% of Crémant de Bourgogne.

The majority grape varieties of this region:
For the reds: gamay, pinot noir
For whites: chardonnay, aligoté

A little anecdote?
The term "climate" refers to the wine terroir: geological, climatic aspects and human know-how. In Burgundy, there are more than 1000 climates, and each is prioritized according to its quality.

Did you know that a Nuits-Saint-Georges label ended up on the Moon? No?! We explain everything to you:
It was Neil Armstrong, who during the Apollo 11 mission in 1969 decided to deposit a label of this famous Burgundy wine in tribute to Jules Verne. The latter had anticipated, as early as the 19th century, in his book Around the Moon a mission to the Moon. The 3 protagonists of its story, when they accomplish their mission, decide to celebrate everything with a bottle of Nuits-Saint-Georges!
… This is to say how famous Burgundy was already in the 19th century! 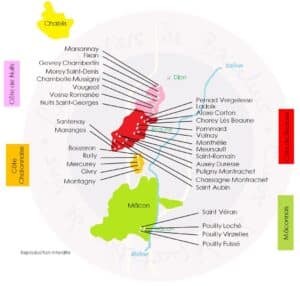 The production is mostly white (more than 80%)! The particularity of these wines is that they are for the most part in single grape variety!

A little anecdote?
Did you know that Alsace is the driest region and the second sunniest after Roussillon?! This makes it possible to obtain very aromatic wines that keep a beautiful freshness!
… And good tasting of course!

Did you know that green foot glasses are native to Alsace? In the 19th century, to hide the "defect" of green reflections (which are characteristic of a lack of maturity of the grapes), winegrowers served their wines in glasses with green foot. Thus, they could say that the reflection came from the glass and not from the wine… 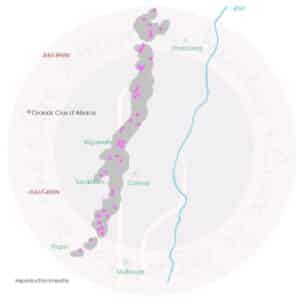 The appellations of controlled origin are essentially Champagne and Champagne Grands Crus.

There are mainly white Champagnes and some rosés. The production of still wines in Champagne is very low (AOC Bouzy and Rosé-des-Riceys).

The grape varieties of this region:
– Pinot Noir, Pinot Meunier and Chardonnay.

Did you know that the first woman to run a Champagne house was the famous Veuve Cliquot: Nicole Barbe Ponsardin Cliquot? It was following the premature death of her husband that she boldly decided to take over his business in 1805! A great first, especially at a time when women have no place in the business world… It is to her that we owe the invention of stirring! 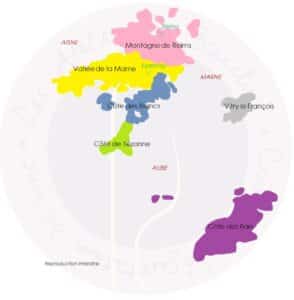 And that's it, it's over for our overview of the French wine regions. We hope you enjoyed it:)